4 Hidden Fears Holding You Back and How to Brave Them 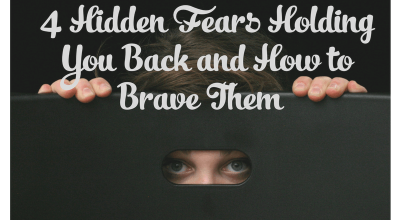 If you want something to be afraid of, it’s not hard to find.

We live in a world ruled by fear mongering.

“This just in! Donald Trump is the new Hitler.”

“North Korea be flexin’ and testin’ nuclear weapons.” (Feel free to use that rhyme at no charge)

Not to minimize the severity and importance of these issues, they’re legitimate happenings to be aware of.

But, they’re not the fears or worries that are going to make a difference in your life.

The real fears, the fears that will diminish your life, the fears to do something about, are the internal “hidden” fears.

The unconscious, internal fears are what keep you stuck and prevent you from being all you can be.

Okay, now for some good news?

You can actually do something about these “hidden fears.”

Here are the 4 hidden fears to master and how to do so.

1. Fear of what others think of you

Most people are afraid to do what they really want because they don’t want to upset other people.

This fear on a more extreme level is an expression of social anxiety.

It’s the fear that people will reject us and exile us from the tribe that keeps us playing small.

This evolutionary part of us that will do anything to avoid being an outcast or pariah is called Tribalism.

In a more primitive social context, Tribalism is essential for survival. Rocking the boat and pushing the envelope could get us kicked out of the tribe and ultimately lead to death.

Fast forward to our interconnected and transparent world of today, and we have a massive, diverse tribe that’s impossible to please.

If you don’t come to terms with this fear, you’ll resist your call to greatness.

“The worst sorrows in life are not in its losses and misfortunes, but its fears.” – A. C. Benson

What to do? Stop making it about you!

Here’s a brief exchange I had with my life-coach a few years ago.

Me: “What if I don’t help my client enough?”

Tripp: “It’s about serving them powerfully – helping them transform their life.”

Ah, of course! If I’m worried about impressing my client, I’m focusing on ME, not on what really matters, which is offering value and serving others.

I had to learn to accept that success is not about people “liking” me; it’s not about impressing them.

Success is about making a difference in as many peoples’ lives as possible, even if some people are affronted along the way.

Instead of worrying about people not accepting your big dreams, focus on how your dreams will make a difference and improve the world!

Following your dream will inspire others to do the same. It will show people what’s possible and ignite the dream chaser spark within them.

So, as much as you want it for yourself, it’s not just about you. It’s about serving others and adding value to the world. It’s about being a leader and taking a stand as a dream chaser.

2. Fear of not being worthy

In an episode of the Unmistakable Creative, guest David Burkus expresses that it takes some level of narcissism to go for your dreams. I agree, but I’m more partial to using the word grandiosity instead of narcissism.

To believe you have a destiny is a little grandiose. It’s crossing a line between the divine and profane.

When we have a massive mission and vision, our self-identity won’t immediately align with these ambitions.

“With realization of one’s own potential and self-confidence in one’s ability, one can build a better world.” – Dalai Lama

What to do? Focus on who you can become

Let’s pretend you believe you have a destiny. The next step requires you grow into it and become the person you’ll need to be.

If you keep growing and bettering yourself, the destiny that once felt over-sized starts to fit.

No one is going to give you the validation that you’re good enough. It comes down to what you believe about yourself.

To me, we’re each a soul, we’re consciousness with a physical body, incarnated to learn what we’re meant to learn, to become whole and reach for our potential.

Your destiny is waiting for you to start. To keep evolving and getting better along the way.

We are all worthy. All that matters is starting. You’re worthy enough to start.

Failure is tantamount to success, but we still fear it.

We all know that perfection is not a reality but we still expect ourselves to never mess up.

You’ll fail as you pursue your calling or dreams. I’m not the best drummer but I practice and develop my craft (more in the past two years than over my entire life).

I’ve messed up and performed poorly. I make mistakes every single time I deliberately practice… and that’s exactly how I get better.

What to do? Create! Create from purpose and flow

Fear of failure contributes to what Steven Pressfield calls “resistance.”

If you can push through the resistance, life possibilities will expand significantly.

Here’s how: Stop listening to your limbic system, or what Seth Godin calls the Lizard Brain, and start using your power to create and be intentional.

Create the contribution, art, or project that wants to emerge from you.

If you really want to leave a legacy and have an impact, put yourself out there. Be human.

Go out and fail, because through failure you can become better.

“Too many of us are not living our dreams because we are living our fears.” – Les Brown

Having audacious dreams is daunting. Where do you start? How can you make it happen?

Without a map to follow we get petrified by uncertainty.

A college education is appealing for this exact reason. It gives you a predicable path. You’re aware of the probability for your success and how long it will take.

As long as you work hard, do what you’re told and follow the rules, there’s minimal risk for failure, or at least that’s the perception.

Uncertainty seems risky. It’s the antithesis of the stable and controlled life we have.

And since people are more worried about what they have to lose than what they could gain, we naturally focus on what could go wrong instead of the inspiring possibilities we can create.

If you aren’t willing to embrace the unknown, your vision will remain small and shrouded in fear.

What to do? Expand your comfort zone

“Do one thing every day that scares you.” ― Eleanor Roosevelt

Your comfort zone, as Susan Jeffers explains in Feel the Fear and Beyond, expands with each risk you take.

As you continue to stretch yourself and take healthy risks, you eventually end up in a new zone of comfort.

This is how the courage muscle grows. You start slaying the dragons blocking your journey. You move toward your fear instead of avoiding it.

Fear fades and faith is strengthened.

It time to take control of your hidden fears.

Now that you know about them, you can stop feeding them.

You can stop doubting yourself so much.

You can accept the vulnerability of following your calling.

You can believe in your dreams, and most importantly take courageous action.